For homeowners in Greenwich CT whose penchant is for rooms with an abundance of natural light throughout the most important rooms in the home, bay windows can certainly be a beautiful and highly desired choice. Finding the right window treatment gives the homeowner a measure of control over the look the bay windows give to the room. Many people opt for vertical blinds, but there are so many other choices for window treatments available that can draw attention to this elegant feature. When deciding on a window treatment for your bay windows, you have to ask yourself about your light control and privacy needs.  Once you know that, there are a number of great options available for dressing up your bay window.

Perhaps, Only a Valance is Needed

In some cases, your bay window may provide a spectacular view without a concern for privacy. If the view from one of your bay windows leaves you breathless almost every time, perhaps you don't need any coverings; perhaps you just need a valance at the top. Whereas valances often are used to hide other window treatments like wood blinds, on their own, they could serve to frame a view from a bay window that is amazing on its own. A valance on its own can serve to make the view the focal point of the window, as long as it doesn't matter that people can see into the room from outside. In some cases, expert designers in Greenwich will install shutters with a fabric valance on top to provide an overall theme, as well as a modicum of privacy. If privacy is a consideration, consider using a fixed valance with operating shades beneath it to provide a greater level of security.

The Drama of Drapery Panels

If the view from your bay windows isn't entirely spectacular and/or you have some privacy concerns with a different window, you may want to consider outside-mounted drapery panels because they may add some drama to your bay windows. Draperies have a unique ability to make bay windows seem larger than they are, and mounting drapery inside on high tension rods helps to maintain focus on the windows instead of the window coverings. Draperies also have the ability to add some color and softness to the windows, while highlighting the bay window as the main attraction, especially if mounted just a few inches above the window frame.

Silk panels have a very traditional look to them, even as they manage to update the look of any bay window in virtually any room, although they have the potential to take on a very modern feel, depending on the designer's intent. Some designers suggest applying fabric tape or a braid to the inside of each panel, or to use two colors of silk: one for the body of the drape, while attaching a one- or two-foot band at either the top or bottom of the silk panel.

While many dismiss roman shades because they look "too feminine," when they are mounted inside a bay window, they can be made to appear very modern and take on a very structured appearance. Unlike many other treatments in a bay window, roman shades can enhance both the elegance and the functionality of bay windows. That is because they manage to frame the window at the same time, they provide color and depth as a window accent.

Get a Little of Everything with Layered Treatments

When it comes to bay windows, it can be a good idea to combine several window treatments at once. Layering treatments is sometimes the most effective way to get the most performance and style. If a designer pairs a blind or shade with drapery or a valance, they will generally have more control over the light that comes into a room, as well as provide some extra energy-saving insulation.   While combining two types of window treatments has been common for a long time, some designers are now using three and four at a time in some cases. 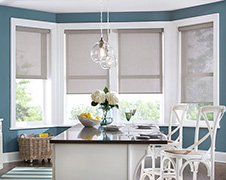 Which Window Treatments Are Best for Bay Windows?

For homeowners in Greenwich CT whose penchant is for rooms with an abundance of natural light throughout the most important rooms in the home, bay windows can certainly be a beautiful and highly desired choice. Finding the right window treatment gives the homeowner a measure of control over the look the bay windows give to the room... 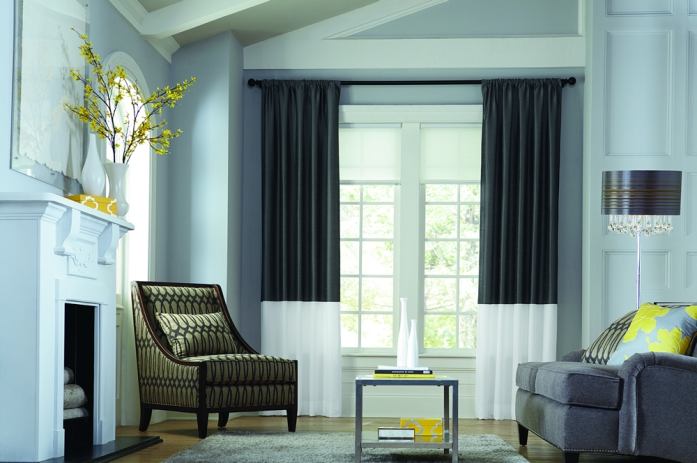 A Cleaning Guide for your Greenwich Window Treatments

If you are in the market for new window treatments for a room in your Greenwich home and you just need more information about cleaning and maintaining them.