There are many types of window treatments. When it comes to bay windows, you can find yourself limited in some way, but there are still some excellent additions. Could shutters in San Marcos work for your bay windows?

The simple answer is yes, although they work much better for interior window treatments than exterior ones. Shutters make excellent additions to your bay windows, offering you full benefits and excellent style. However, not all styles of openings will work. You’ll want to think about the way you can full open your shutters.

The majority of windows will use door shutters. These open and close like cupboard doors, usually with the shutters opening in the middle to sit either side. Sometimes, you can get a shutter that opens one way, so it’s like a larger, single cupboard door.

While these types of shutters in San Marcos look good for most windows, they’re not right for your bay windows. When you open the doors, they’ll cover another part of your window, getting in the way of the light you want to let into your home.

The best thing you can do is get a set of shutters that will open with a fold. They tend to fold within themselves, so they sit on either side of the full window frame. You can choose to open the shutters on just one part of the window, or you can open the full thing.

You’ll want to think about how these shutters sit in your frame. One of the downsides is the weight, causing damage to the middle of your windows. Sitting them on a runner so you can slide the shutters open and close will work much better.

Rather than choosing a set of shutters that open fully, you could always work with café shutters. These will sit at the bottom half of your bay windows. You’ll keep the top half of the bay windows open, so there’s never a need to open and close the windows.

What’s the point in these types of shutters? Well, they’re actually perfect for bay windows, which are designed to allow plenty of light into your home. The shutters will allow you complete privacy, since you can close the louvers on them to prevent all sight into your home. When you want to see out, you just open the louvers again.

One of the downsides is complete lighting control. You’ll need another set of window coverings that work well with your shutters in San Marcos. Drapes or curtains tend to work well, and you can fit the railing at the top relatively easily.

Shutters look absolutely beautiful in bay windows. You’ll need to work with the style of bay and the color of your décor, but there is something for you out there. In fact, shutters in San Marcos can be some of the most beneficial options for your windows, especially when it comes to interior design.

4 Tips for Securing Your Front Door

An unsecured front door is a burglar’s first entry choice. We’ve put together 4 tips you can start using today to help keep out any unwanted intruders. 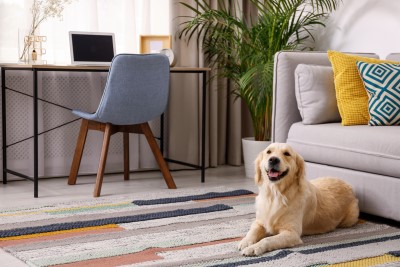 7 Tips to Keep Your Home Secure with Pets

Keeping a house safe is often a top priority for home owners. This priority also often extends to keep a home secure for our pets.