Since 2014 Budget Blinds® has been in partnership with Homes for Our Troops (HFOT), supporting their mission of building specially adapted, mortgage-free homes for severely wounded post-9/11 Veterans. Our part is supplying and installing custom window coverings for each house from our exclusive Signature Series® collection, donated by our manufacturing partner, Springs Window Fashions®.

Budget Blinds franchise owners across the country are our feet and hands on the ground, who tirelessly contribute time and expertise to ensure that every home is outfitted with faux wood blinds on every window and door, including the windows in the garage. These blinds contribute to the beauty, functionality and energy efficiency of the homes, providing year-round comfort and light and privacy control. Additionally, the master bath has the added safety and convenience of motorization—complete control at the touch of a button!

This month, two homes were completed and awarded to Veterans in Cartersville, GA, and Tim and DeAnna Kirby, franchise owners of Budget Blinds serving Cartersville were very excited to measure and install the window coverings in both homes. In keeping with the commitment of Budget Blinds and Springs Window Fashions, on Key Ceremony day when both homes were awarded, everyone was represented. From left to right: 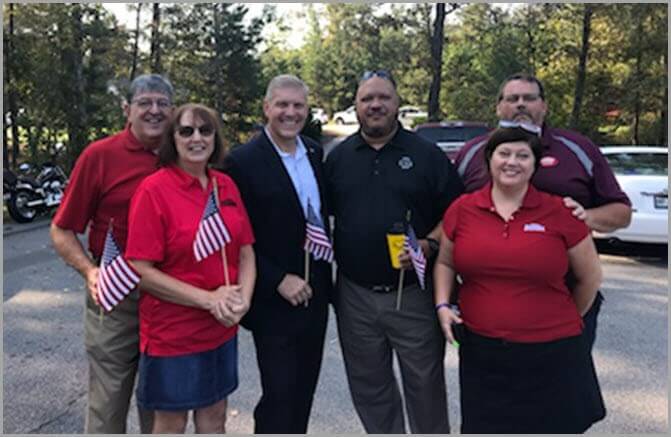 Tim Kirby of Budget Blinds serving Cartersville shares his feelings about the experience and what it means to him to be a partner with Homes for Our Troops:

“I was hoping at some point that they would build a home in my area, so when I found out they were going to build two here, I was ecstatic! My brother served for 29 years as a 75th Airborne Ranger in the Army and did two tours: one year in Afghanistan and one year in Iraq.  He told me stories about teammates that were injured while he was over there. So, when I was offered the opportunity to help some of those, I jumped at the chance without hesitation. It turned out to be one of the most fulfilling things I’ve ever done, and the chance to do two made it even better. My wife and daughter came out and helped me do the installs as well as Bill and Cheryl Herder, owners of Budget Blinds of Acworth. Neither of the home recipients was originally from Georgia, but they both chose Cartersville, which says a lot about the community. I hope in the future that more Veterans will choose to come down this way. I’m in the process of trying to start up a golf tournament to help raise funds for Homes for Our Troops.”

Homes for Our Troops representatives, community leaders, new neighbors, and fellow injured Veterans turn out for the festivities of Key Ceremony Days that include arrival by caravan, speeches, flag raising in the front yard, ribbon cutting, keys presentation and a tour of the homes. It’s an emotional time for everyone as this day marks a new beginning and brighter future for each Veteran and their family. 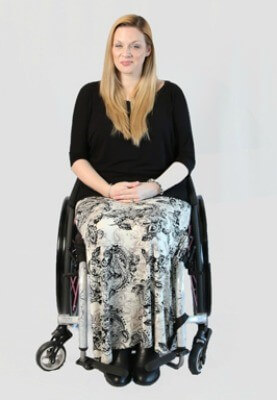 PFC Heather Kready enlisted at the tender age of 17, coming from a background of family in the military. In 2006 she deployed to Afghanistan as a surgical technician and was moving 150 pounds of medical equipment when she tripped, and the heavy items fell on her. Undetected at the time, she had received a spinal cord injury that worsened over the years, resulting in partial paralysis from the waist down. She shares, “When it first happened, there was a lot of pain and certain movements would make it worse. Over the years, my legs became more numb, and I had seizures.” She endured 15 surgeries to repair nerve damage in her lower back, abdomen, right knee, and kidneys. She also suffers from Reflex Sympathetic Dystrophy, a neuro-inflammatory disorder that occurs when the nervous system and immune system malfunction while responding to trauma. Within the past year, she adopted an aggressive approach to rehab with aerial yoga and working out and has regained the ability to walk with a cane.

Mom to Kailee and Kody, she is looking forward to the freedom and safety of the specially adapted HFOT home. “Instead of having to be taken care of, I would like to be autonomous again. In the last house, I was stuck in an upstairs bedroom for three years. I’m looking forward to the ease of movement. Homes for Our Troops is giving us a chance to be more. It will give me an opportunity to dream again, to think about the future and give that opportunity to my family.”

Her new home in Cartersville, GA, will enable her to be more active, grow her own food, cook, do laundry and take care of her children. She is pursuing a degree in criminal justice and wants to continue volunteering to help other Veterans. Hobbies include quilting and writing, and she often shares her poetry at military funerals and has had her work featured in a war memorial. 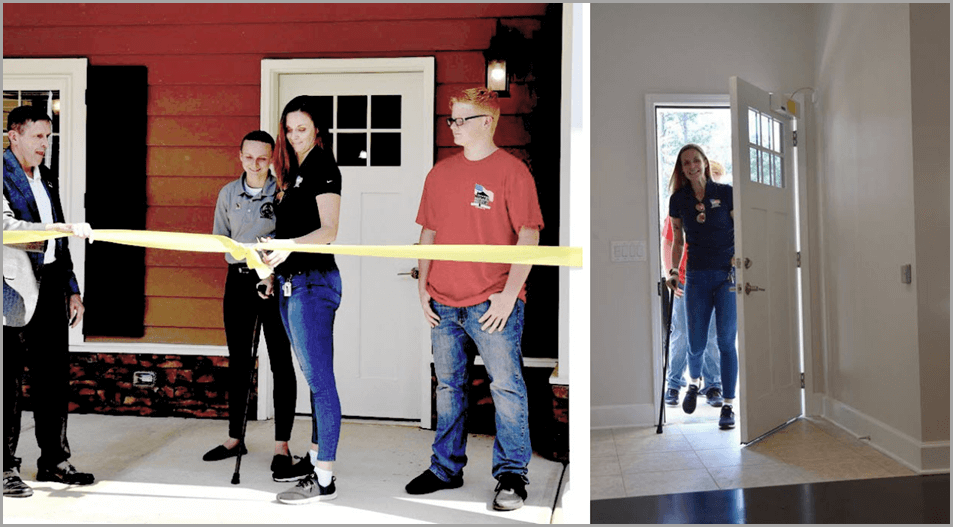 Bill Ivy (far left), Executive Directory of HFOT, assists with cutting the ribbon before receiving the keys to the new home. Heather says, “We’ve never had a home before, so this is a first!” 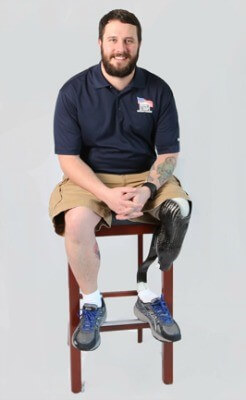 SGT Finn Visbal joined the Army right out of high school in 2008, enthralled by his grandfather’s stories of being a tanker in the Army. On his second deployment to Afghanistan in 2012, the vehicle he was in ran over an improvised explosive device (IED). Everything went black and he realized he was injured when he tried to stand up. When he later woke up in the hospital, he discovered he had received significant damage to his left leg and his right foot. After surgeries and months of physical therapy, his left leg was amputated below the knee and he received his prosthetic and was walking in three months.

Finn met his wife, Holly, while going through recovery, and it was life-changing for them both. He shares, “There was a time before we met that I was kind of in a dark place, starting to get sad, but once I met her, she just pulled me right out of it.” Holly was a young widow, struggling to find happiness herself. She says, “I never thought to be happy again. He has showed me that something bad can happen to you, but you can still move on and it will be okay.” They now have a son, Johnny, and look forward to space, comfort, and freedom in the specially adapted HFOT home in Cartersville, GA.

Finn is pursuing a degree in automotive technology and working as a mechanic at a local franchise. He’s excited about the home’s big garage that will give him space to enjoy his hobby—working on cars. He learned about HFOT from a home recipient he met at therapy. He says, “A specially adapted home from HFOT is one of the greatest things I can think of. Thank you for helping wounded Veterans, like myself, to be able to get back to living life as normally as possible. It means the world to me.” 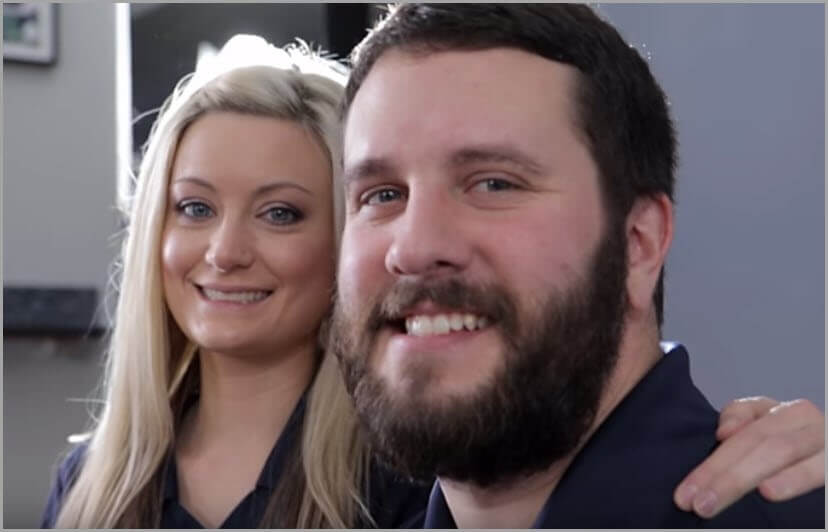 All smiles as they get ready to move into their forever home; Holly shares, “When he’s older it will be harder, so it’s not just about right now, it’s about the rest of his life.”

Hear Finn and Holly share their journey by clicking here.

Style and service for every budget
Budget Blinds offers a wide variety of high-quality window covering options, with blinds of all kinds, including real wood blinds, aluminum blinds, and fabric blinds, shutters, natural woven shades, cellular shades, drapery and more, including smart home technology and Somfy® motorization, child-safe cordless options and eco-friendly products. Unlimited colors, styles, and finishes can accommodate every taste and every budget, including yours. Call 866-879-9730 to schedule a free, in-home consultation or go online at www.budgetblinds.com to find a Style Consultant near you. 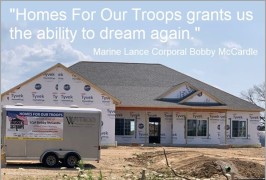 “There’s no place like home for the holidays” is never truer than when it’s a brand new, specially adapted home from Homes For Our Troops (HFOT), 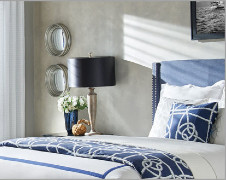 September was an exciting month for Budget Blinds® and Homes For Our Troops (HFOT) as three severely injured Veterans received the keys to their mortgage-free, specially adapted HFOT homes on September 25th.