Coinciding with National Patriot’s Day, May 4th through the 31st is Budget Blinds’ inaugural Salute Our Troops Month, a special month-long appreciation to U.S. veterans and Canadian Armed Forces members (regular force, reservists or retired) who were wounded or injured during their time in service. As a tangible expression of support, Budget Blinds has partnered with our manufacturer, Springs Window Fashions® who produce our high-quality line of Signature Series® blinds, window shades and drapes, to donate $15,000 to Wounded Warriors Canada (WWC) this year.

As a privately funded charity, WWC depends on a consistent base of support from individuals and Canadian businesses. Scott Maxwell, Executive Director of Wounded Warriors Canada shares, “Wounded Warriors Canada is fortunate to have the support of businesses like Budget Blinds to help us in our mission to provide direct programming support for our ill and injured Canadian Armed Forces members, veterans and their families. [Such] partnerships make our programs possible and the generosity, care and compassion of Budget Blinds franchisees and consumers will have a direct impact on those we serve.”

It’s the half-way point in Salute Our Troops Month. You are invited to join with Budget Blinds by donating to WWC to help ensure the accomplishment of their mission to Honour the Fallen, Help the Living through their numerous life-changing programs. To make a donation visit:  BudgetBlindsSupportsWWC.ca and select “Budget Blinds” in the drop down menu.

As is often the case with help organizations, Wounded Warriors Canada is a success story borne out of a horrible tragedy.

On September 18, 2006, in Kandahar City, Afghanistan, a suicide bomber killed four Canadian soldiers and injured other soldiers, civilians and children, leaving three Canadian Military Engineers in critical condition. They were transported to Landstuhl, Germany for medical care while their families were making travel plans to join them. 20-year-old Sapper Mike McTeague was among the wounded, and he was fighting for his life. Good medical care brought positive result, but the glaring need for “a little more of Canada” in regards to personal items and activities to fill the long days and to undergird and facilitate recovery was obvious.

Thus, in 2006, what ultimately became WWC was started as The Sapper Mike McTeague Wounded Warrior Fund, dedicated to supporting all wounded Canadian Forces members and their families with care packages and other services that went beyond the medical ministrations. Over time, both Mike and the fund continued to grow healthy due to the outpouring of support from individual Canadians and Canadian businesses. Today, as Wounded Warriors Canada, they are the nation’s leading, wholly independent, veteran’s charity focusing on mental health, particularly, Post-Traumatic Stress Disorder. 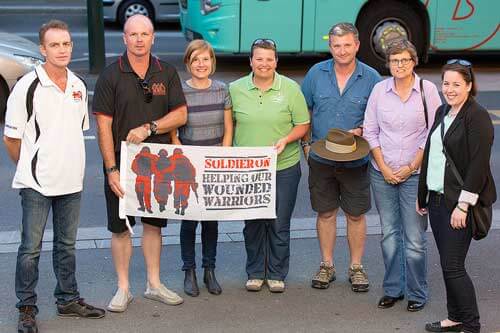 Budget Blinds and parent company, Home Franchise Concepts (HFC), also have a legacy of supporting veterans.  Partnering with Wounded Warriors Canada in January, 2015, was a natural step in our growing portfolio of veteran initiatives.

By partnering with WWC, Budget Blinds will help raise awareness for WWC by promoting our Salute Our Troops Month sale event through various media, including TV, radio and newsprint in May, and by socially promoting WWC’s national fundraising events. Events such as next month’s 2015 Battlefield Bike Ride, Liberation of the Netherlands, that had over 100 retired Canadian Armed Forces members and civilian riders last year,  and the various Tough Mudder events of which WWC is a proud charitable sponsor.

It’s an honour to stand with WWC as they physically, emotionally and spiritually assist and support ill and injured Canadian Armed Forces members and their families through selective programs that help to ease the transition back into civilian life.

“At Home Franchise Concepts we share a strong commitment to supporting Veterans who have served. Many of our founders have personal connections to the Armed Forces as do a number of our franchisees across the organization. It is our hope that the synergies between Budget Blinds and Wounded Warriors will continue to honor and support Veterans for years to come.”–Todd Jackson, COO at Home Franchise Concepts and co-founder of Budget Blinds

There is still time to take advantage of our special sale promotion during Salute Our Troops Month. You can receive 25% off selected Signature Series® window coverings for your home. Just contact your local Budget Blinds Style Consultant before May 31st and schedule a free, in-home consultation.  You’ll be able to choose from a wide range of styles and colours in window treatments including blinds, shades, shutters, and drapes to make your windows beautiful. Don’t wait! Call 888-771-2532 today to schedule an appointment, or go to www.budgetblinds.ca to find a Style Consultant near you.

For more information on Wounded Warriors Canada visit www.woundedwarriors.ca or connect with them on Facebook at www.facebook.com/Wounded.Warriors.Canada 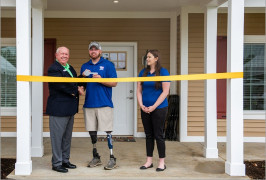 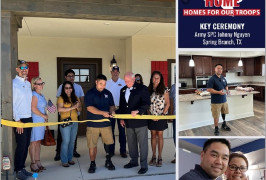