Homes for Our Troops (HFOT) is a national nonprofit organization dedicated to building mortgage-free, specially adapted homes for severely injured post-9/11 Veterans so they can rebuild their lives and begin to live their dreams. Budget Blinds® is proud to be the official window coverings supplier for HFOT, in partnership with our long-time manufacturing partner, Springs Window Fashions®.

This January, HFOT reached 250 homes awarded in 42 states since 2004. Budget Blinds has participated in over 85 builds since joining HFOT as a corporate sponsor in 2014, donating and installing faux wood blinds throughout the homes.

Giving back to deserving Veterans

It’s exciting to be an integral part of HFOT’s mission of building homes with over 40 adaptations to make them fully accessible to Veterans whose lives were turned upside down because of their sacrificial service. They sustained catastrophic injuries, including multiple limb amputations, partial or full paralysis, hearing and vision loss, severe traumatic brain injury (TBI) and Post Traumatic Stress Disorder (PTSD). HFOT’s mission is to help them with recovery and rebuilding their lives and aligns perfectly with Budget Blinds’ legacy of supporting Veterans.

“Once our Veterans move into their mortgage-free, safe and fully accessible homes, you see hopes and dreams once again become a part of their lives. They are able to attend school, obtain jobs, expand families, launch businesses, compete athletically, and even climb mountains. Their caregivers are under much less stress and able to accomplish life goals as well. On behalf of HFOT’s staff and Board of Directors, I sincerely thank you for helping us make a real impact in the lives of our nation’s most severely injured Veterans.” –HFOT President and CEO, Tom Landwermeyer, Jr., Brigadier General, USA Retired

SSG Christopher Gordan saw Courage Under Fire, a 1996 movie starring Denzel Washington as a U.S. Army tanker and he was inspired. So inspired, that he joined in the Army in 1997 as a tanker. Reenlisting after four years in Germany, he finally ended up in Iraq in 2004 with a Stryker brigade. Unfortunately, in 2005, a roadside bomb hit his vehicle and he lost his right leg above the knee and had severe damage to his left leg and left arm. He spent a year at Walter Reed Medical Center, undergoing several surgeries and learning to walk on a prosthetic leg, which he says was the biggest challenge, and that it continues to plague him. “A prosthetic is not the most comfortable thing in the world, so when you get home you want to take it off; unwind. But you still want to be functional and that’s what this home will do.”

He and his family are very excited about the new, specially adapted HFOT home that will allow him to shed the prosthetic at home and comfortably maneuver throughout the house in his wheelchair. When he first walked in, he exclaimed, “It’s just unbelievable. It’s a life-changing thing!” Wider doorways, hardwood floors, roll-under cabinets in kitchen and bathroom, automatic doors and, his favorite, a roll-in shower. “I’ve been really looking for a shower like that since I got injured. It’s really going to change how I do business from now on.”

SSG Gordon is going to school for a graphic design degree and volunteers time to help other wounded veterans. He enjoys golf and therapeutic horseback riding and believes this home will enable him to more fully experience life. He wants HFOT and all its supporters and donors to know they are making a difference. “Being provided a specially adapted custom home is truly life-changing. There are not enough words to express my gratitude.” 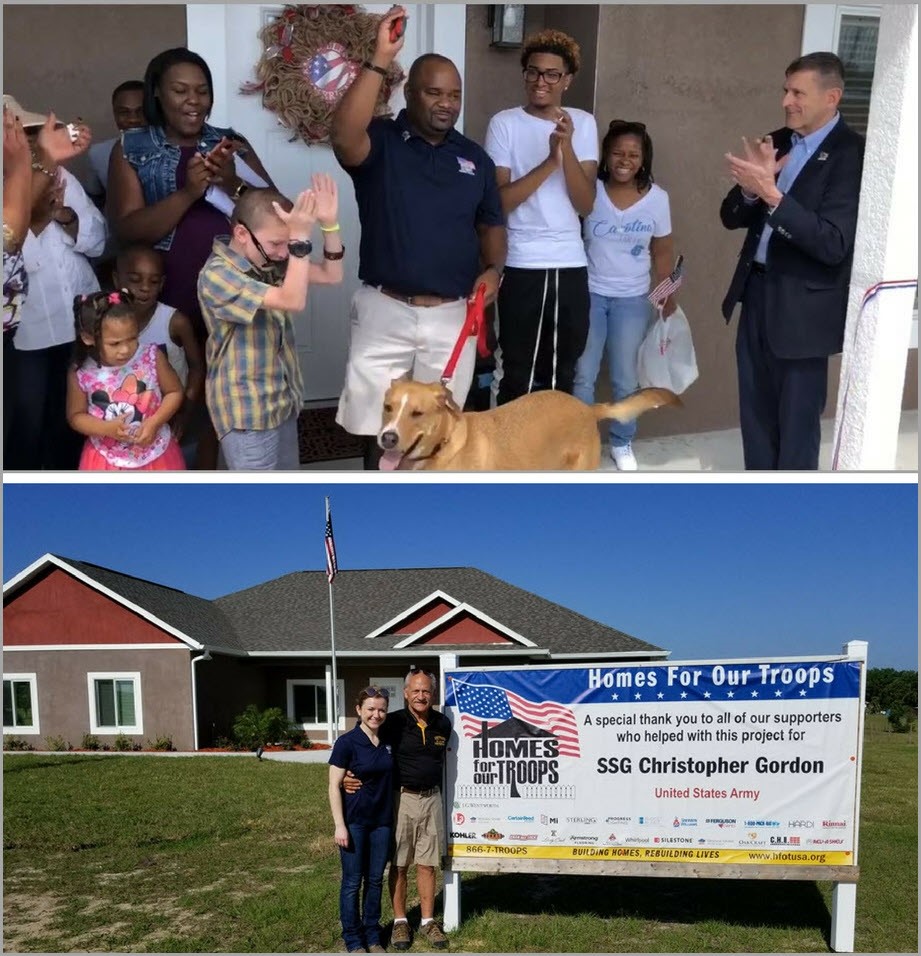 Erwin and Dawn Goldberg, franchise owners of Budget Blinds of Clermont, measured for and installed the blinds throughout the home. They were proud to participate in their first HFOT home and they, along with their installer, Frank Klum, attended the Key Ceremony where Gordon arrived on horseback with fellow military personnel. Erwin was one of the speakers for the day and thanked SSG Gordon for his service and shared the hope that this home would give comfort and normalcy to everyday life. 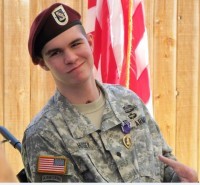 SPC Alexander Hussey joined the Army shortly after graduating high school and went through infantry training and jump school and was deployed to Afghanistan in 2012. On patrol in Kandahar Province with the 508th Parachute Infantry Regiment, a nearby detonated improvised explosive device (IED) knocked him unconscious, and he remained in a coma for six months. At first, he was not expected to live, sustaining the loss of both legs and his left hand and experiencing severe traumatic brain injury (TBI). He doesn’t remember the blast incident or the journey that took him to Germany, Walter Reed Medical Center and the Palo Alto VA Poly Trauma Center where he finally woke up. He then transferred to a rehab facility in Southern California where he relearned speaking, eating and moving his body. Now he uses a wheelchair and continues his recovery with equestrian and pool therapies.

A year and a half after his injuries, he married his long-time sweetheart, Kim, and they have been living with his parents. The new specially adapted home will be a new lease on life for the couple and they look forward to a kitchen where they can cook side by side. Kim shares, “Most of our relationship has been apart; him in the military, me in Oregon, and then in hospitals. Being able to be home and in the same house is such a blessing. It means a lot, having a home specifically for Alex, it’s going to make him feel like he’s independent again. He doesn’t have to depend on a family member to take care of him.”

SPC Hussey loves sports and animals and hopes to one day work with animals and coach basketball. This home will allow him to be part of a community and find an outlet for helping other veterans. About the new home and HFOT he says, “Building homes for Veterans and their families is a blessing. It gives them a chance to be a family in a home that does not limit the veteran to one room; it gives them privacy and a chance to be a family without the hospital.” 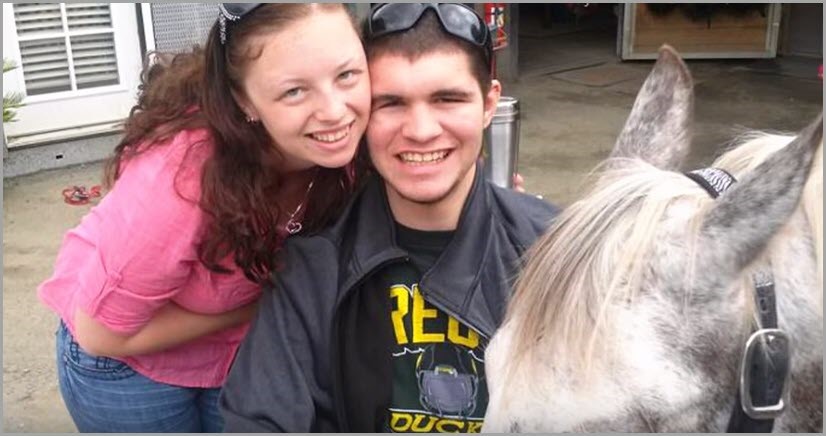 Franchise owners of Budget Blinds of Vancouver East, Kenneth and Lyndell Whalen, had the privilege of installing the blinds in the Hussey’s new HFOT home, including specialty motorized blinds in the master bath. This eliminates the need to reach across the tub to adjust the blinds and reduces any risk of fall or injury. They provided measuring services and professional installation to ensure functionality and easy care for years to come.

Create your own dream windows

If your window treatments could do with an update, Budget Blinds offers a variety of high-quality window covering options, including shutters, blinds, natural woven shades, cellular shades, drapery, and more, in colors, styles, and finishes for every budget. Call 866-879-9730 to schedule a free, in-home consultation or to find a Style Consultant near you.

To learn more about the Budget Blinds / Homes for Our Troops partnership or to make a donation, visit We Proudly Support Our Troops.

Welcoming A Veteran To His Forever Home In Colorado

Building specially adapted, mortgage-free homes for severely injured post-9/11 Veterans has been the mission of Homes For Our Troops (HFOT) since 2004.

Homes For Our Troops (HFOT) is a nonprofit organization that has been building specially adapted, mortgage-free homes for severely injured post-9/11 Veterans since 2004.